Is meeting in the metaverse worth it?

The pandemic has taken us to remote working, and we were intregued by the potential of Virtual Reality to improve the quality of collaborative remote working.

Virtual and Augmented Reality are on on the up

European spending on Virtual and Augmented Reality will grow 68% year on year, taking it from $2.8 billion to a whopping $20.9 billion in 2025. Headset shipments are predicted to from 11 miliion to 105 million in that timeframe.

In 2020, seven percent of responding UK doctors said they used virtual reality in their practice.

You might say professionals and consumers are excited about VR. 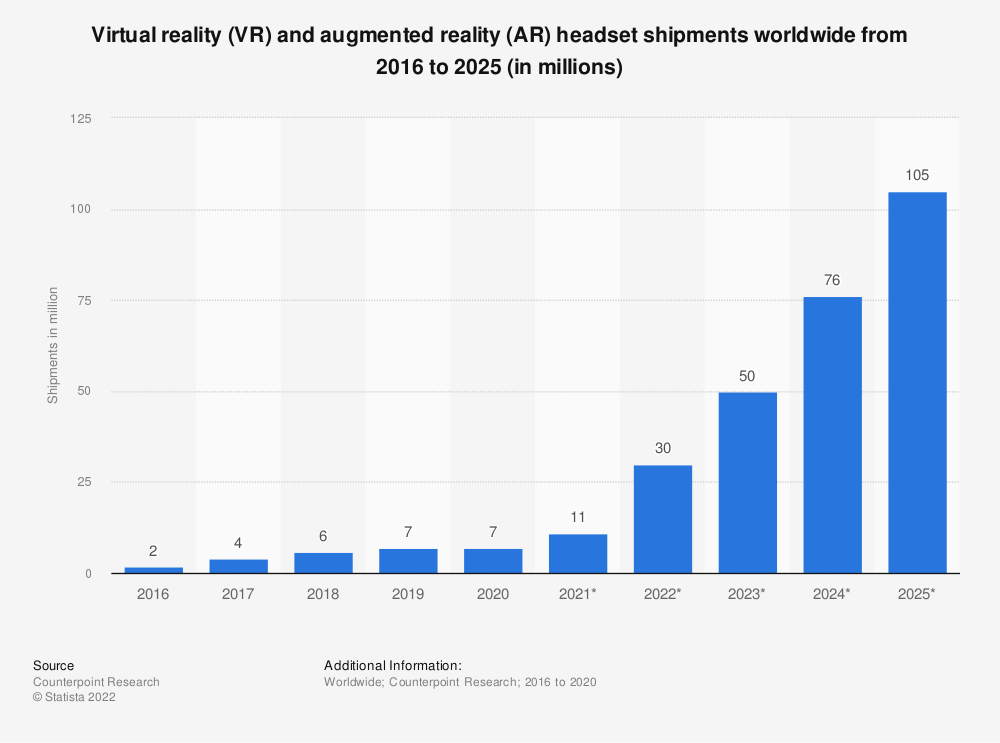 Apple is reportedly working on its own Virtual reality headset, and Google, Adobe and Microsoft are all brewing their own set of tools to help organisations apply Virtual Reality to work.

We've started our VR journey with a good old experiment. Firstly, trialling VR meetings with a small cohort with a series of 5 meetings where we do actual work. We'll review findings and, if positive, expand the cohort to include more people and iterate.

Our aspiration is to get more value from the time we spend online together and do more productive work. Here's an update from week 2.

P.S - Take a look at this to learn how to set up your business for VR meetings in the metaverse.

The second meeting in the metaverse

Our second meeting in the Metaverse started with laughter.

I'd entered the room sprawled out face down on my virtual desk, which apparently looked ridiculous. Sadly nobody grabbed a photo of that. In real life I wasn't actually face down, I'd just put my Quest 2 headset on the desk to clean it.

If you invest £1,000-£2,000 and buy three-six Quest headsets, you'll find your meetings are full of comedy moments like this. It's all part of learning to use the technology.

In this case, the lesson here is to always clean your headset lens before you join the meeting. 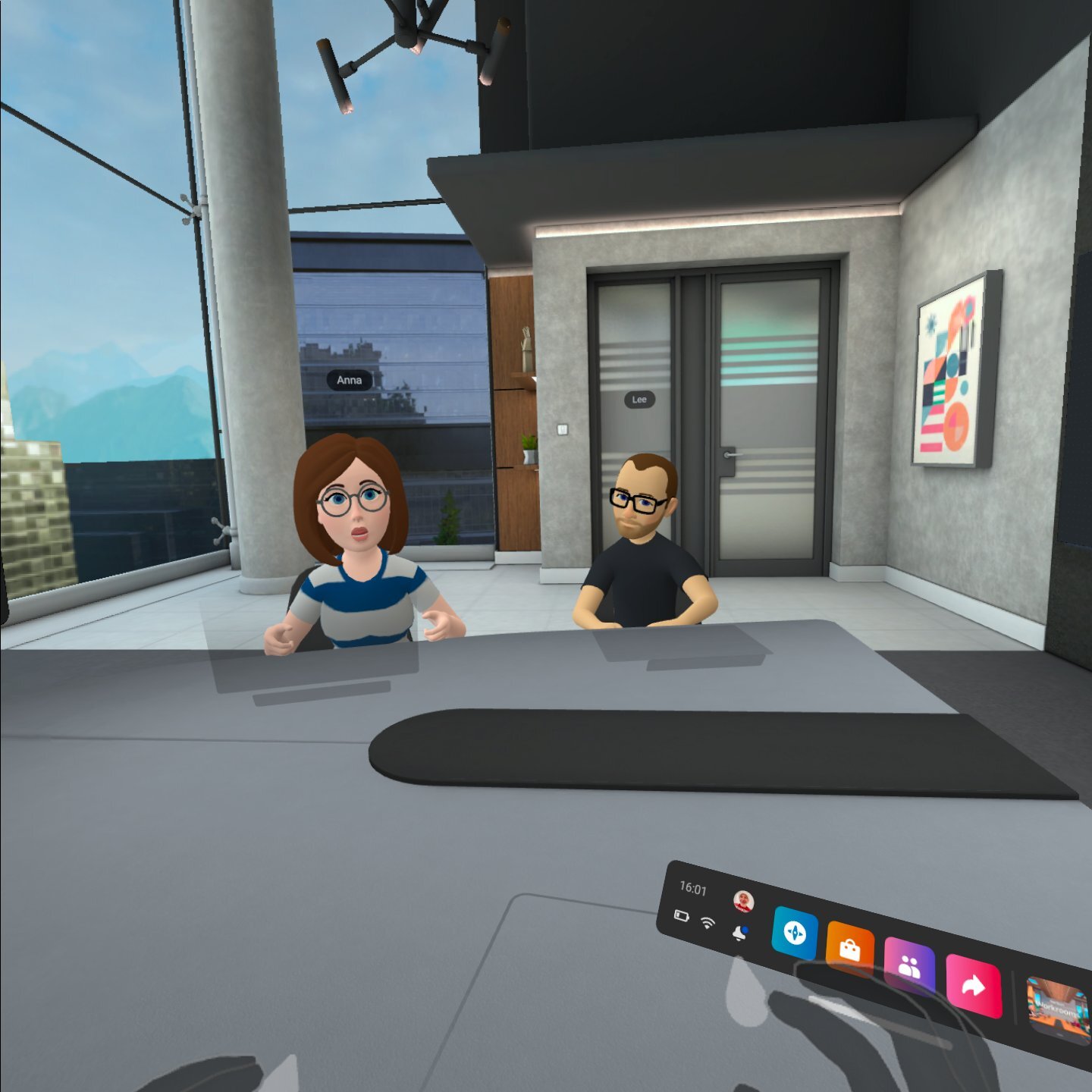 Comedy aside, in our short time trialling VR meetings, I've noticed that the vibe in the virtual room has been a really positive one.

As some of you pointed out, trying new things is fun, so you need to take the early excitement with a pinch of salt.

But there is more to it than just novelty.

There were three of us in this second meeting. We all agreed it feels better than using regular video conferencing like Zoom or Google Meet. But why?

There is a feeling of actually being together in a "space". And that makes a huge difference to just staring at a flat screen with faces on it (including your own mug).

You forget you're in VR

The important thing here is that you actually forget you're in VR; you're just focusing on the conversation, the people around you, the whiteboard or the screen share. You're actually with people.

It feels very natural. Strangely,  images and video can't communicate it very well at all. It looks bonkers and you probably think it's not appealing. At least that's how I saw it before trying it.

This experience is improved by the spatial audio. You can turn to look at someone who starts talking to the side of you. It's much easier to find the speaker because you just use your ears like you would in a normal room.

Whilst I'm thinking about it, there is something about the cartoony aspect of the meeting space that lightens the mood. This works well for creative meetings.

I don't think this will work for things like performance reviews or sales, but I'll try it with a slightly more serious theme at some point and report back.

We discovered we could use a laser pointer in our virtual meeting room to assist with discussing designs.

You can just about see that here, note the red line on the screen on the right wall, and the laser pointer in Annas' hand. 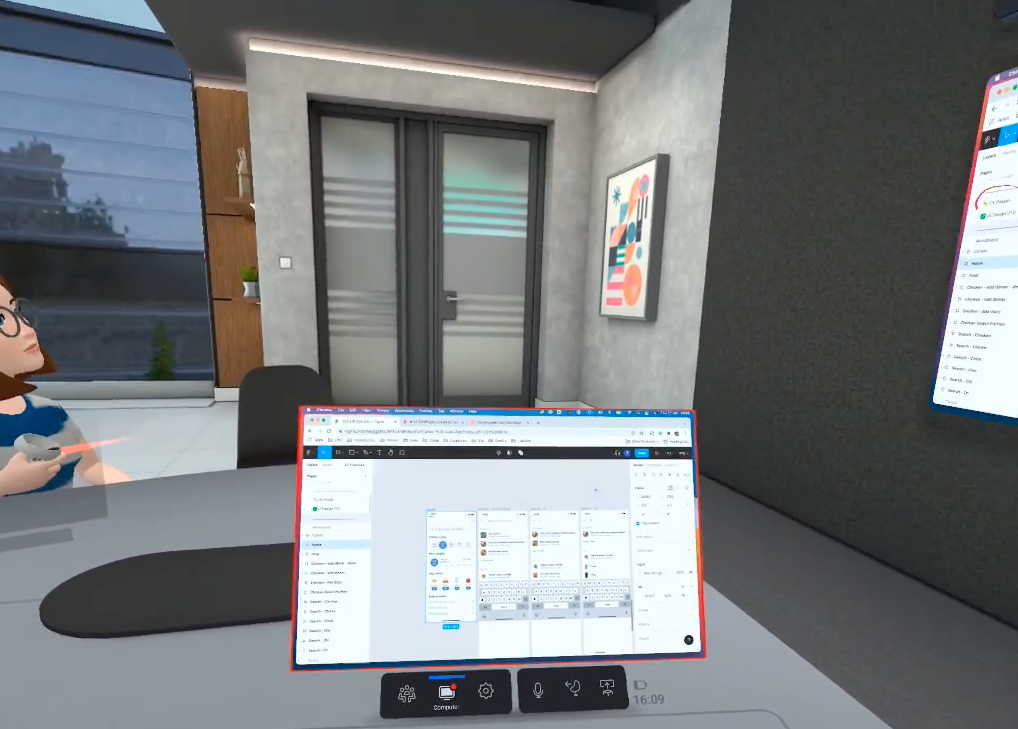 To give some context, this meeting involved reviewing the feature design for a mobile app that provides nutritional data to people with Type 1 diabetes. It was important because this particular app is failing to satisfy a minor but important customer segment, so we're really keen to fix it for them to drive up our app store ratings and customer retention.

So, I was sharing my laptop screen on the wall, showing designs for everyone to see. Anna was sitting opposite me using one of her VR controllers as a laser pointer. This meant she could point at various app design features whilst we discussed them. It's a really nice touch.

Be prepared for the same kinds of setup problems you experienced with Zoom back in 2020.

People may have to fiddle about to get their laptop screen shared properly, or they might have forgotten to charge their headset and find a cable to use it tethered.

You'll find it pretty slick, but you need a little patience to get used to it. Like Zoom, we think we'll have got a grip on this within a month of use.

If you're doing creative meetings with a light vibe, this seems to fit very well. Here's some pro's and cons'

Why a merchandise store is a good idea

How we use Rocks to make business improvements sustainable and fun

Is meeting in the metaverse worth it?

How to run a meeting in the metaverse

Remote-first and working from anywhere